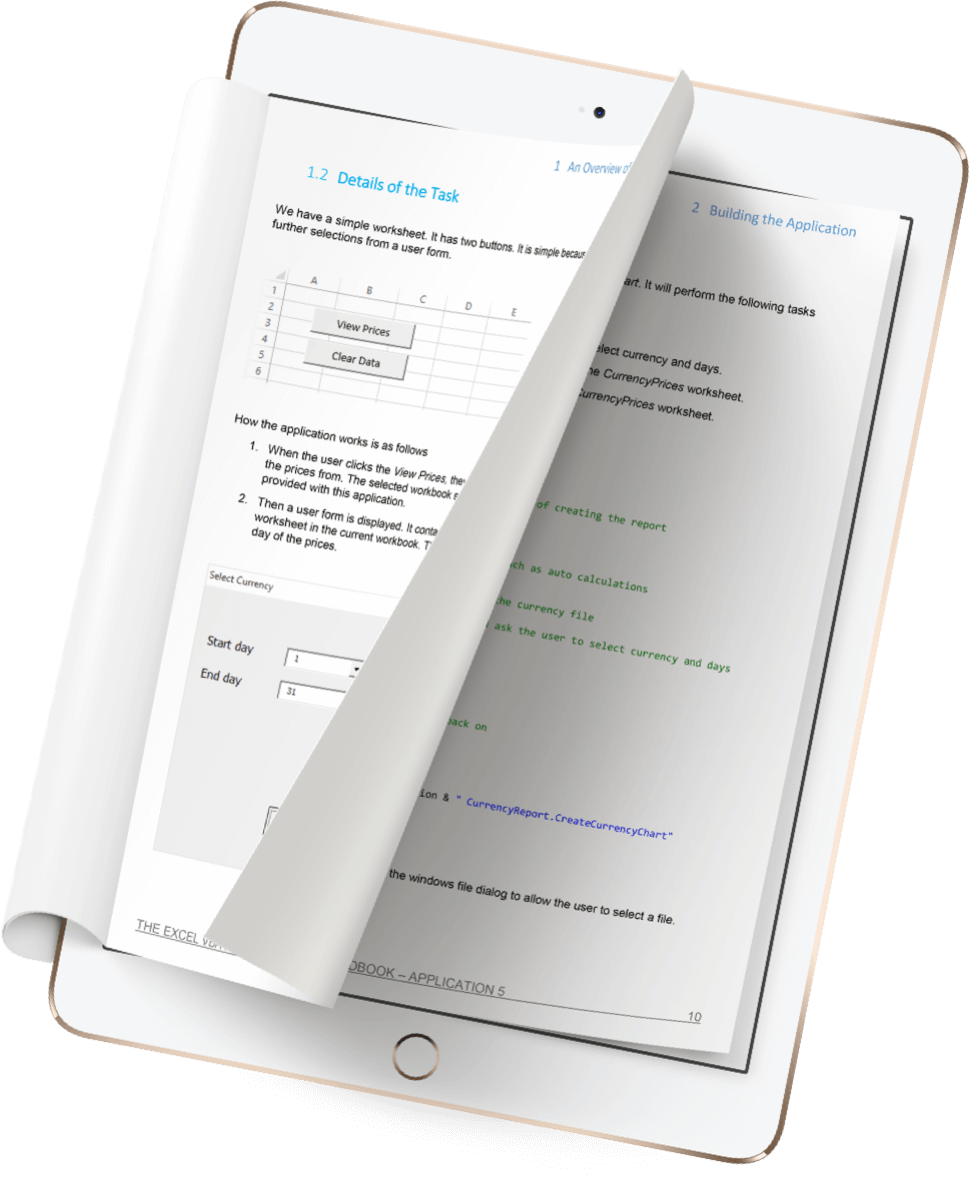 If you are planning to build a VBA application in the near future, then I believe this will be one of the most important messages you’ll ever read! Here’s why…

Most people try to learn VBA the wrong way!

Despite all this, the thought of building your first VBA application still seems overwhelming.

You may have even built your first application but found it a slow and painful experience. Most people build their first VBA application by using Google to create every single line of code.

The reason why people struggle to learn VBA is simple…

No course or book teaches you how to create a VBA application!

They explain all the parts of the VBA language but they leave it up to you to figure out how to put it all together.

Imagine trying to learn to drive a car from listening to someone talking for 8 hours. Imaging trying to learn how to ride a horse from reading a book. It would be ridiculous.

Learning VBA is no different.

It’s not only about building an application. You need to know how to build it the right way. Most people write awful code in their first application. Over time they eventually learn how to create proper applications. But this comes after much trial, error and frustration.

— Skipping all this frustration and time wasting

— Learn VBA from someone who does it professionally

— Having access to the programming secrets and little-known techniques used by the top VBA coders.

I considered creating the course myself. At first I was reluctant. It would take considerable time and effort to create full applications and to provide a step-by-step guide for each one.

Based on the number of comments and queries from readers of my blog it was apparent that most people struggle to create VBA applications. Time and time again I was seeing mistakes and frustrations that could easily be avoided if the user has access to the right information.

I floated the idea to people on my email list. A course that shows you how to build 10 VBA applications from start to finish. The applications would cover a wide variety of VBA applications so the user could see how the same principles can be applied to any application.

The feedback was overwhelmingly positive. People were literally begging me to create it. Twelve people paid up front from me to go ahead and create the package.

And this was how the Excel VBA Handbook came to exist…

What is the Excel VBA Handbook?

Unlike your typical VBA course, it will teach you practical and useful VBA code that you can use immediately. It will show you proven principles and little-known techniques that professionals developers use to create their own applications. It provides explanations in clear English that anyone can follow.

It will ultimately show you how to build any VBA Application in a fraction of the time you thought possible. 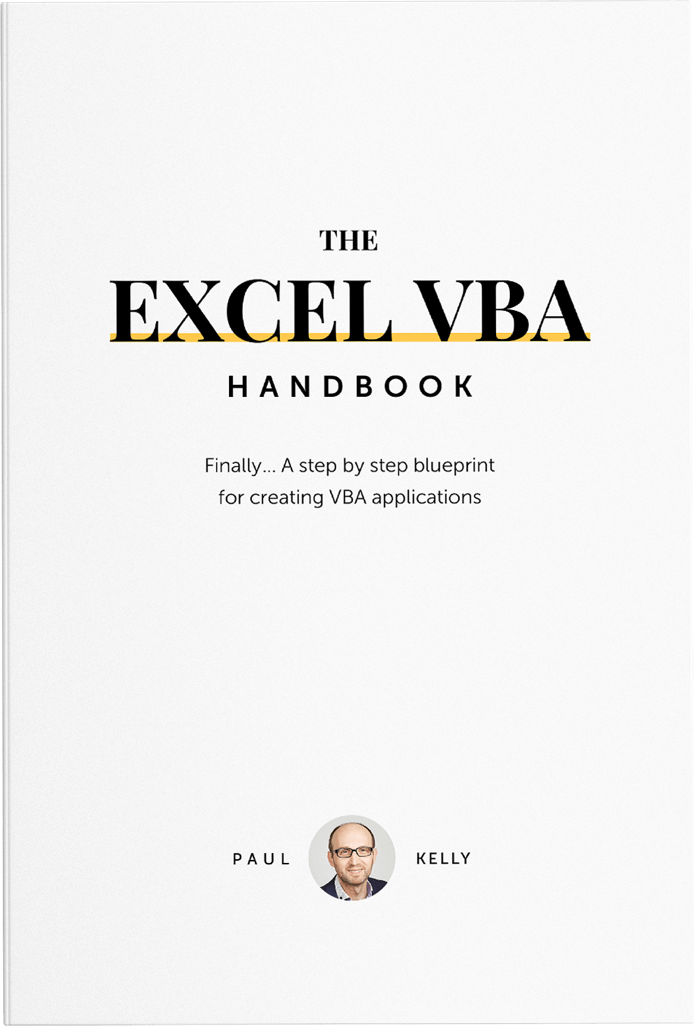 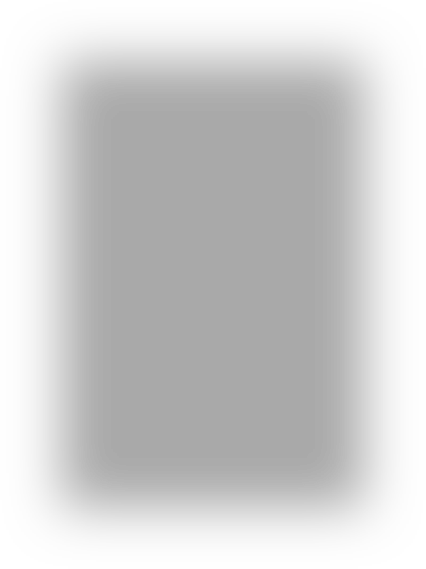 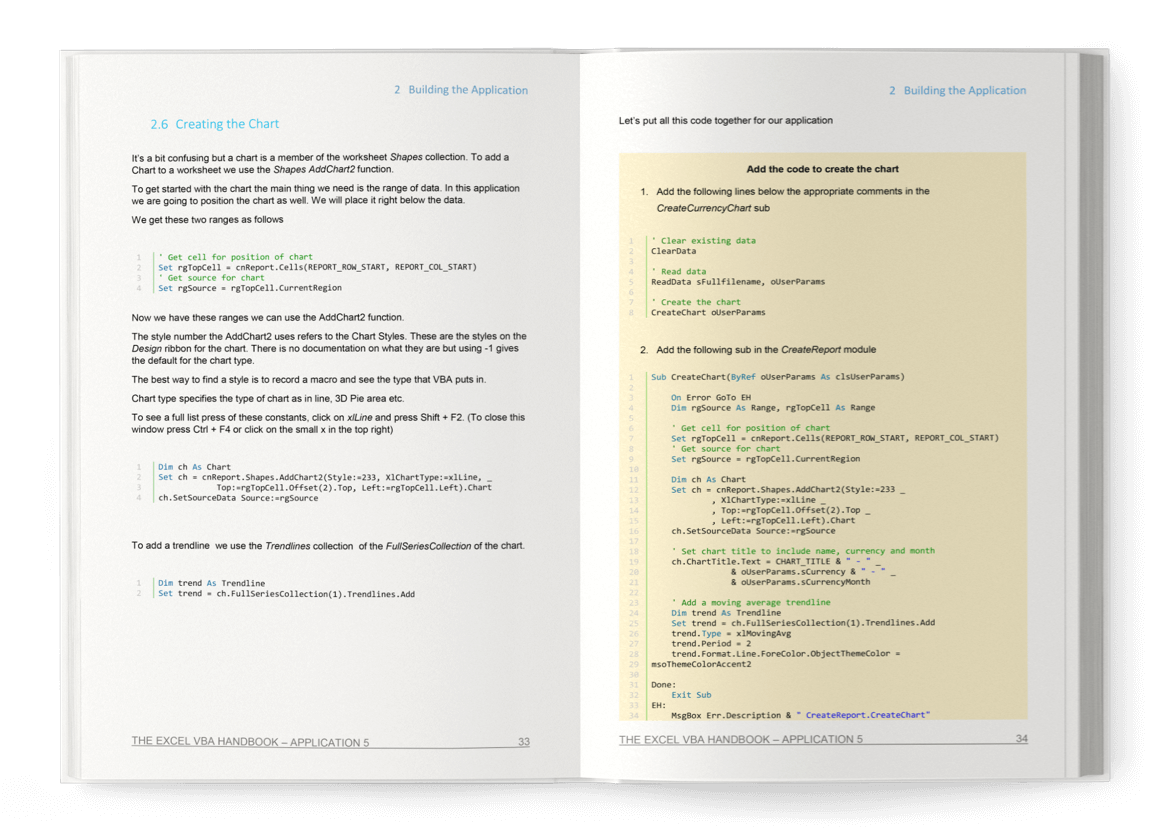 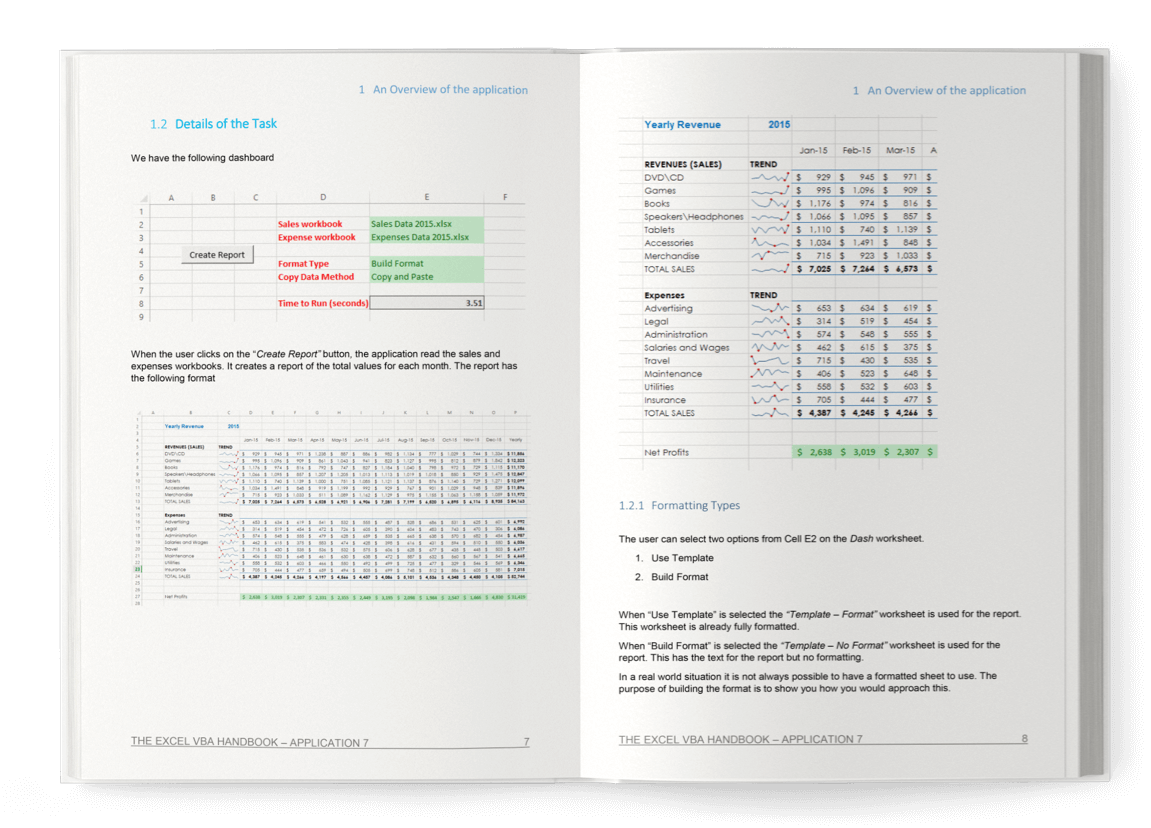 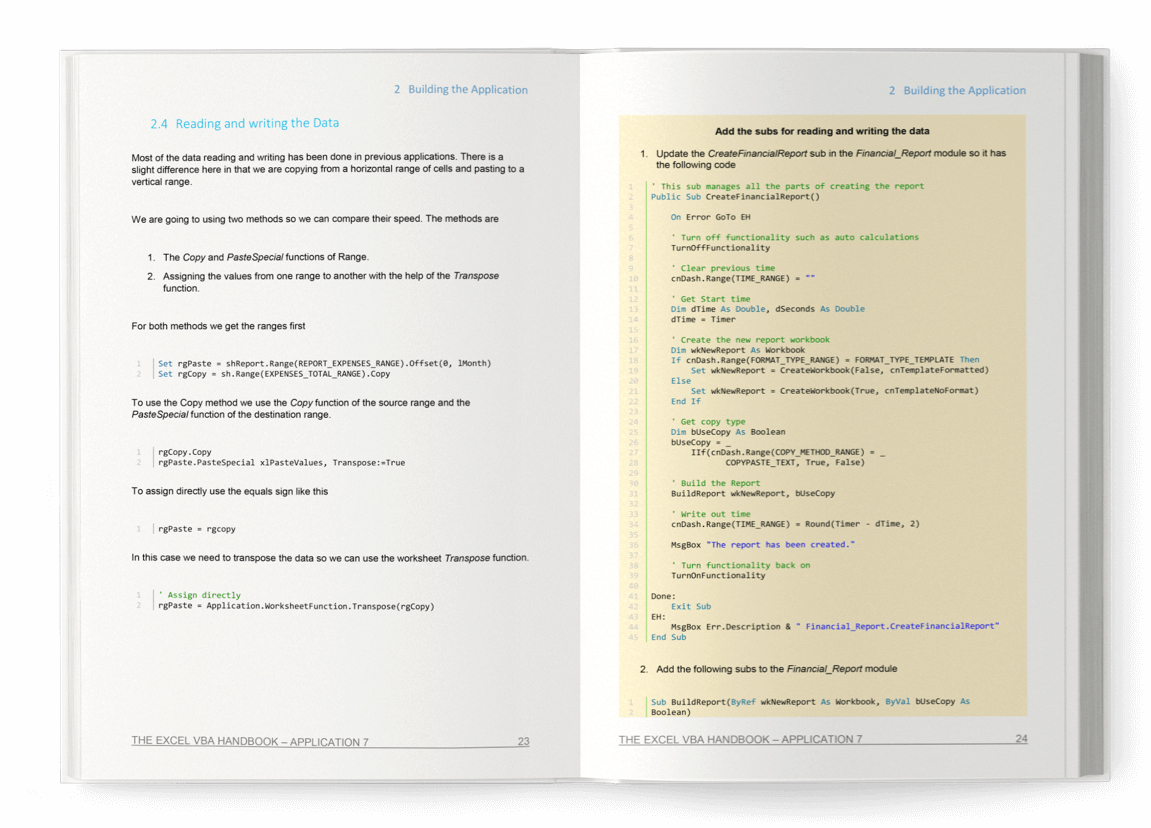 The Excel VBA Handbook will help you to…

Build VBA applications in 10% of the time it normally takes you.
Produce Bulletproof VBA code for any application.
Create applications that are suitable for use in a business environment.
Reduce the time you spend fixing errors by up to 90%.
Learn concrete and demonstratable skills that will enhance your career opportunties.
Learn techniques you can apply immediately to any VBA application.
Get compliments from your colleagues as they wonder «How did you become such a genius at VBA?».

This is the only VBA resource that…

Walks you through the creation of VBA applications in a easy to follow step-by-step manner.
Gives you a simple framework with which you can build any application in VBA.
Teaches you how to write easy-to-read professional quality code.
Shows you how to design, plan and build a full VBA Application.
Provides thousands of lines of ready-to-use code.
I’ve spent nearly 5 years developing, testing and optimizing the most complete, proven and easy-to-use system for building VBA applications
— Paul Kelly
The Applications
1

Learn how to build a simple framework for any VBA application. This application reads data from a closed workbook and writes it to the current worksheet. It may sound simple but it covers techniques you will use in 90% of your applications.

Building on what you did in the first application, this one takes things much further. We run through the data keeping a running total for each team. Using data like this is a very common requirement in many VBA applications. Learn how to use the Dictionary to easily maintain running totals for multiple items.

Use Excel to send an Email with a worksheet attached. This application shows you how you can easily interact with Microsoft Outlook. If you are planning to have an email component in your application then you can pretty much copy and paste the code from here. How emails are sent does not vary much between applications.

Major Topics Include:
Sending an email, adding attachments to an email, Dealing with a collection of items, adding/deleting Worksheets, creating a new workbook.
4

Worksheet tables are a very useful and important part of Excel. Learn how to convert your worksheet data into a beautifully formatted table. Automatically sort or filter the table based on cell entries.

Charts can add a lot to your Excel projects. Learn how to maniplate them using VBA. Create a Chart of daily prices for a user selected currency. In this application you will see how to use the Windows File Dialog to allow the user to select a file and how to create your own UserForm.

Major Topics Include:
Creating a custom UserForm, adding/deleting a Chart, Inserting a chart trendline, using the Windows File Dialog to allow the user to select a file.
6

If you are using a Excel then a database is never too far away. Being able to connect to a database can greatly enhance the potential of your application. In this project we will read data from an Access database and write it to a worksheet. Next, we will write data from a worksheet back to the datatabase. Even though we use an Access database, this code will work for any major database including SQL Server and Oracle. The only difference is the connection string.

Major Topics Include:
Connecting to a database, reading and writing between a Database table and a worksheet, deleting all records in a database table, using optional parameters in a sub or function.
7

If you use VBA for any length of time you will at some stage be asked to create a formatted report. Learn the two ways to do this - using code or using a template. Here we do both so you can use either in your own code.

Major Topics Include:
Reading from multiple workbooks/worksheets, formatting a report, using a template to format a report, adding sparklines to cells, measuring how long a VBA application takes to run.
8

Pivot Tables are one of the most powerful parts of Excel. Discover how to easily build a pivot table using VBA. Turn raw book royalties data into easily readable data.

Major Topics Include:
Creating/deleting a Pivot table, adding rows/columns/filters and values to a pivot table, groupings dates by week.
9

Reading from a text file to a worksheet and vice versa is a common task in VBA. This application reads and writes using files of both fixed and delimited types.

Scrape Data From A Web Page

In modern times it is very useful to read data from a web page to a spreadsheet. This application will show you how to automate this task. Reading from web pages using is much easier than you might think. 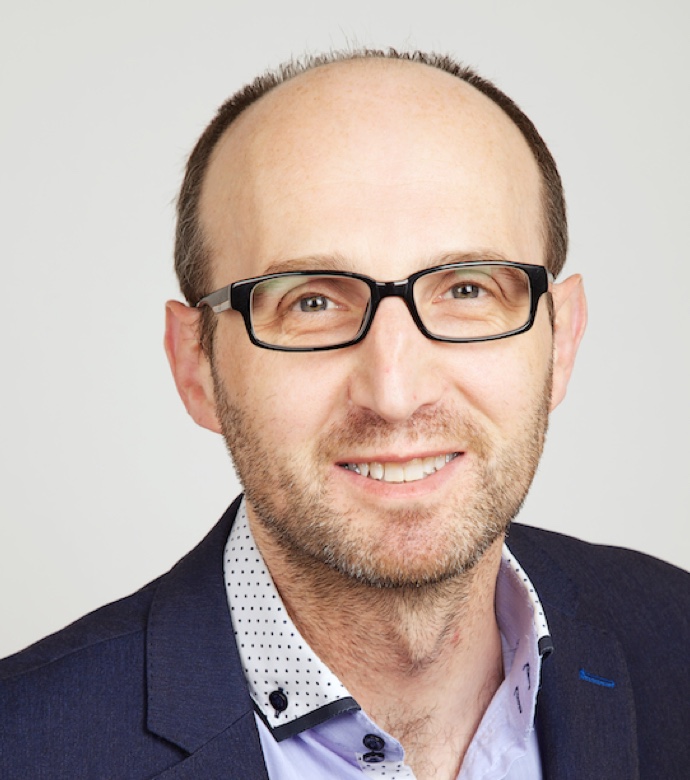 I have written over a million lines of code in a 20 year software development career. I have worked for the largest insurance company in the UK, was a senior software consultant for the Worlds biggest Car Rental Corporation and have worked with many other well known companies.

For the last number of years I have involved in building advanced Excel applications and training Excel users to get the most from Excel Macros in very competitive environments.

Based on my experience with Excel users I wrote a book in 2014 which became a best-seller on Amazon. Following on from this I created a blog to share my knowledge of VBA. It currently receives over 50,000 visitors a month and is growing from strength to strength.

My vision is to take people who are enthusiastic about learning VBA and help them become masters of the craft.

How do I know if this is right for me?

If you can answer yes to one or more of the points below, then I’d say you’re perfectly qualified to jump into VBA Applications and get the most out of it:

You are going to build a real world application in the near future and you’re feeling overwhelmed.
You’ve spent a significant amount of time trying to learn VBA but still feel disheartened when trying to create an application.
Your new position requires creating a VBA application and you feel you’re lacking the knowledge and skills.
You enjoy VBA but find creating applications a slow and frustrating experience.
You want to master VBA in the shortest time and most efficient way.
You would like to create a VBA application for your own work but don’t know where to start.
You have created applications in the past but you feel there is a lot of room for improvement.
You want to improve your career opportunities by gaining a greater understand of VBA than any of your peers.

Who this is not for

If you’re not willing to put in the time and effort then the VBA Handbook is not for you.  Just like any worthwhile skill, VBA requires work and practise. You can read the books and watch the videos all day but you have to be willing to put the effort in and go ahead and build the applications for yourself. Remember the only way to learn how to build VBA applications is by building VBA applications.

What Customers Have Said

Thanks for VBA Handbook content. Some of the best I've studied, and your approach to writing code did more to make it easy for me than anything else I've studied.

I have almost finished all applications in the VBA handbook. There is no doubt that it was the best programing book I have read so far.

Secondly, just a word of thanks for an excellent and informative VBA Handbook. I am learning so much about structuring my code and making it easy to follow. And man that Dictionary part! Not to speak about the “FilterorSort” executing whenever one of the selected cells are changed! And and and ...! Fantastic stuff – Thank you.

Thank you for the VBA Handbook. It is one of the best courses I have taken! It is very practical and provides great and inspiring examples. The course is not VBA course, but VBA programming course. I love your practical approach. There are many courses that teach the language, but not so many courses teach programming.

I first encountered Paul on Udemy and wish I had come across him many years earlier. I have learned more about VBA than I could have imagined. After completing the Udemy course I purchased his VBA Handbook and completed the exercises. Thanks heaps Paul.

By the way, VBA Essentials was the best code learning experience I have ever experienced.

I have just started going through your Excel VBA Handbook, which is fantastic and will indeed help me greatly. I already love your methodology … simple and organised – excellent!

Thanks again for the course. It’s great. I am finding it so helpful – you have managed to combine some critical training features: Constant repetition of the fundamental features that need to become ingrained, such as structure of approach. Sufficient speed of development module to module to maintain constant growth and interest. Relevance to most commercial challenges - Databases, Email, Interaction with other programs, display of result.

You have any questions or feedback?